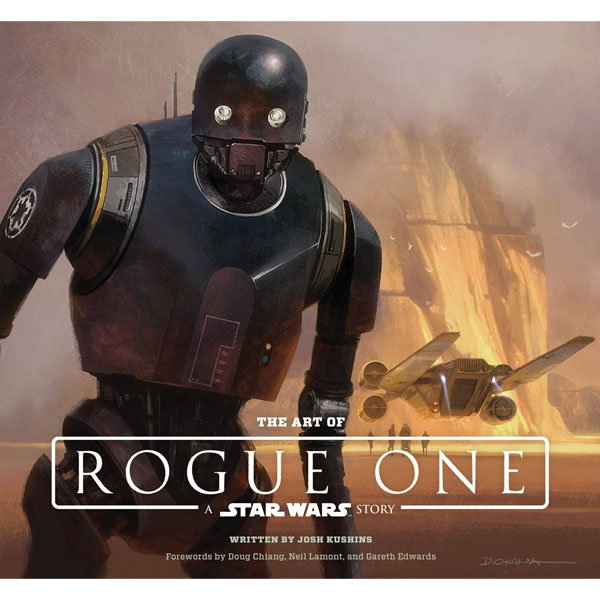 Step inside the Lucasfilm art department and experience the creative genesis of Rogue One: A Star Wars Story. A thrilling endeavour for the Star Wars franchise, Rogue One is the first instalment in the Star Wars Story series, a collection of stand-alone tales set in the same beloved universe fans have called home for decades. The plot follows an unlikely band of rebel fighters, led by the intrepid Jyn Erso (Felicity Jones), who must unite to resist the evil machinations of the evil Galactic Empire. Their mission is a desperate one: prove the existence of the Empire’s new super weapon and steal the plans for this Death Star before it can be used to obliterate all who stand in the Empire’s way. Directed by Gareth Edwards – from a script by Gary White and Chris Weitz – the film also stars Diego Luna, Forest Whitaker, Mads Mikkelsen, Alan Tudyk, Riz Ahmed, Ben Mendelsohn, Jiang Wen, and Donnie Yen.

The Art of Rogue One: A Star Wars Story is an invaluable visual chronicle of the Lucasfilm art department’s development of the fantastical sets, otherworldly machinery, and unforgettable characters found in this first Star Wars Story. This book will take you from the earliest gathering of artists and production designers through production, with unprecedented access to the filmmakers’ creative process.

Bursting with exclusive interviews and imagery, fans can revel in hundreds of stunning works of art, including production paintings, concept art and sketches, storyboards, and matte paintings. This rich visual journey is sure to delight Star Wars fans and cineastes for decades to come. The Art of Rogue One: A Star Wars Story will stand as a definitive guide to the art behind the newest tale in the Star Wars franchise